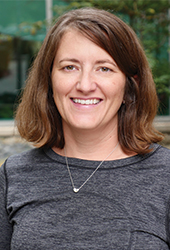 Meredith Wold earned an undergraduate degree from Southern Methodist University in Dallas, TX. While in Texas, Meredith enjoyed exploring the golf courses of the South as a member of SMU’s Division I women’s golf team. After graduation, she returned to her Midwestern roots and completed a Masters in Physician Assistant Studies from Augsburg University located in Minneapolis, MN.  Meredith currently holds an adjunct faculty role at the same University. Meredith has spent her career as a hospitalist APC at Regions Hospital in St. Paul, MN. While at Regions, Meredith co-founded the Hospital Medicine APC Fellowship program, co-chairs the Regions APC Committee, and serves on the Regions Medical Executive Committee. Meredith speaks both regionally and nationally about Hospital Medicine APC models and post graduate APC education. In addition, Meredith is a Past President of the Minnesota Academy of Physician Assistants. In her free time,  she enjoys playing pickleball and exploring local parks with her husband and three children.